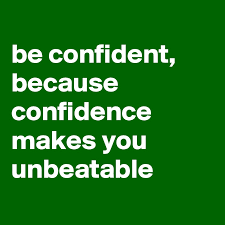 It Is About The Obstacles To Confidence

Recently I spoke to the Farmington Regional Chamber of Commerce on my favorite subject, confidence. In fact it was all about creating a Culture of Confidence®.

The feedback I received was very encouraging to me. It validated the fact that so many people want to be confident in themselves but are haunted by those four obstacles that I refer to as G.A.I.L. s.

These four obstacles stand in the way of our quest for confidence and no one is immune from them. But learning more about them is the first step. Once I learned about them I became able to recognize when they were playing a part in my own confidence.

Once I was aware of these obstacles to confidence I could adjust my thinking when they arose.

The first is called a Gremlin. That is the little voice that keeps you from trying new things or taking on a project. It tells you that you are not good enough, that you are not ready, that this is not for you. It is a tool to protect your ego from harm.

The second obstacle to confidence is Assumptions. This is the belief that because something happened in the past it is going to happen in the future. In reality it is an excuse not to take some action because you think you might not achieve the success you hoped for.

The example that most men will understand is asking someone for a date. That person says, “No.” Without thinking it through, without considering all the possibilities as to why that person said no, the man refuses to ask for another date because he assumes the answer will be “no” again.

The same rationale applies to asking for a sale. “No” is not the end of the game. One “no” does not mean it will be followed by another.

The third obstacle to confidence is called Interpretations. This is an opinion or judgment that you create about a person, place, thing, event or situation that you believe to be true.

This is a self-defeating thought that you basically make up based on some event.

If you had the confidence I want you to have, you would put a different spin on the situation. Have you ever called or texted someone and have them not answer or respond? Do you ever think, “Gee that was an intentional slight?”

It happens in life all the time. My sales professional clients tell me that they find themselves in that situation often. Rather than look at it as a slight, simply put a different twist on it.

Look at it this way. You can’t let the unexplained actions of others determine how you feel about yourself.

The last of the G.A.I.L. s is your Limiting Beliefs. These are things you accept about yourself, the world around you or the people in it that limit you in some way.

These are all over the place. Again these serves as excuses for not taking action or rationalizations for not doing better.

You might say that you do not have as much education as your co-employees so you will never get a promotion. Maybe you think you are not as nice looking as someone else and use that as an excuse.

Age is a limiting belief. Many people want to say that they are too old to try something new. Hogwash. Yes, I said “hogwash.”

What ever your limiting belief is, let loose of it. It is not the truth. It is only an obstacle to your confidence.

My clients start their time with me not even realizing these G.A.I.L.s are what is standing in their way to confidence and success.  When we are done, so are the G.A.I.L. s.

If you are ready to develop an unbeatable confidence, contact me.