How Can I Get Leadership Training 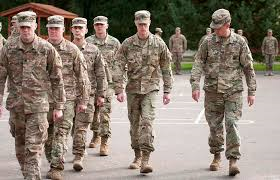 There is no real substitute for the leadership training one can get in the military. It isn’t the only place to learn leadership. There are various institutes around the world that offer courses on leadership. I applaud that.

As an expert in developing confident leaders and giving leadership training I have attended a number of courses, learned some valuable lessons and endured situations that have solidified my role as an expert in this filed. None, however, tops my experience in the United States Army.

It has always been my philosophy that you find what you are looking for. I came of age during the Viet Nam war era. There was little doubt that I would be in the military at some point in my young life. That is where I received my best leadership training.

My father had been a Captain in the Army Air Corps serving as an Intelligence Officer in North Africa during WWII. It seemed that a continued lesson he had for me, whether I seemed interested or not, was about what it takes to be a leader. These were not formal lessons. They came in the way of comments on situations and how those situations could have been handled better. He never sat me down and said, “This is how to be a good leader.”

Had he done that, I think the lessons would have gone in one ear and out the other. Mainly because as a youth, I was not a natural leader. I did not see myself as a leader. I was scrawny, nonathletic, had ears that protruded from the side of my head like ping pong paddles and was generally afraid a lot.

Had my father sat me down to teach me how to be a good leader, I would have wondered why he was talking to me.

By 1968 I was graduating from college. I was about to lose my student deferment and would become eligible for the draft. I had always wanted to serve in the military. I saw it as an honor and a duty. A duty as a citizen and an honor to my father’s service. It only seemed appropriate that I become an Officer and continue a family tradition.

It was then that my father sat me down to teach me a lesson. In that lesson he told me that I had all of the qualifications, skills and attributes I needed to be a leader. I just had to believe in myself. And in that lesson he also told me what it takes to be a good Army Officer. That was invaluable leadership training.

The lessons in leadership came much earlier than I anticipated. In fact, they started at the Armed Forces Examination and Entrance (AFEES) Station in St. Louis and never stopped until the day I went off active duty.

In the Viet Nam era our government was drafting people from all socio-economic groups but the lower and lower-middle class kids bore the brunt of the burden. It was clear from day one that there were going to be serving with me who were not only ill-prepared to be soldiers but were ill-prepared to be thrust into even the enlistment process.

The opportunity for leadership was out there for anybody willing to step up and grab the handles. I was a college graduate from a middle-class string family unit. I had been employed since I was 14 years old, worked my way through college and traveled fairly extensively through the United States. Standing all around me were young men who were being asked to possibly sacrifice their lives and many of them had never been more than a few miles outside their hometowns in rural America before dropping out of high school. I did not want to be their leader because I thought I was better than they were. I became their leader in that AFEES station because no one else stepped up.

They were afraid, confused and uncertain of their future. That was totally understandable. All they were looking for was the comfort that someone would help them. And that really was all I could offer. As we milled around all morning waiting for a bus to take us to our destiny they just needed someone to smooth out the rough spots. And that is what I did.

Leadership is about serving. It is about helping others reach their potential.