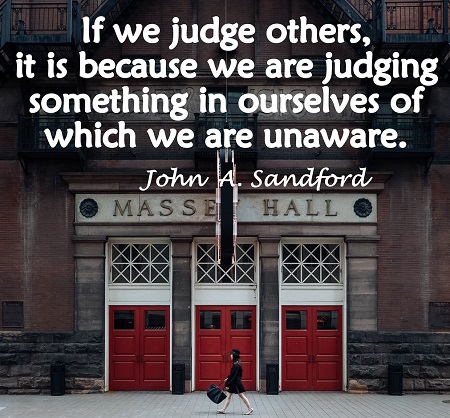 Be Careful Judging Others

Here is a story about human nature. It illustrates how we so often just see things from our own perspective and fail to see the big picture. We fail to see the fallacy of our own actions while we are bust judging others.

The story was relayed to me by my friend Bill T. He told it in a self-mocking way, understanding after the fact, how hypocritical he was being. It still makes me laugh when I think about it.

Bill was a lady’s man. He was better than average looking, successful, a good storyteller and funny. Bill and I had been on a few trial lawyer conventions around the country. He always seemed to meet and get familiar with a different woman at each convention.

On this occasion Bill was in Colorado for some meeting I did not attend. He, as was his way, met up with a new face. The two of them stayed for happy hour, then dinner, then ended up going to her place to finish out the evening.

This was not unusual for Bill. He seldom went out of town without meeting and sleeping with a woman he met on the trip. If Bill had been a woman back then he would have been looked upon with scorn or disrespect. Since he was a man he was looked upon with envy and respect. That is what judging others produces.

Which plays right into the story here.

When Bill and his new friend climbed into bed that night, she looked at him and asked if he had brought protection. HIV had just come into the popular lexicon at that time. Some were quicker to recognize the dangers than others.

Bill was still in the clueless category. He had not even considered using a condom by that point in his life. The idea was foreign to him.

All was not lost, however. His new friend rolled over on her side, reached into her nightstand and produced the required equipment. She handed him the condom.

Here is where the hypocrisy comes crashing in. Bill told me that at that moment all he could think was, “What kind of girl is this? She has condoms right there in her bedside nightstand!”

He got over his moment of judgment and proceeded to don the protective gear but he couldn’t get the thought out of his head that she must have been of low moral character.

It took a day or so for Bill to get all of that settled in his mind. When the big picture became clear he had a good laugh at himself.

This is not a story about good moral behavior. That is not my intent. I am not praising or condemning Bill or his female friends. It would be hypocritical of me to do so.

This story is just a good example of how we find fault in others, often when we are committing the same bad acts. And that is what comes from judging others.