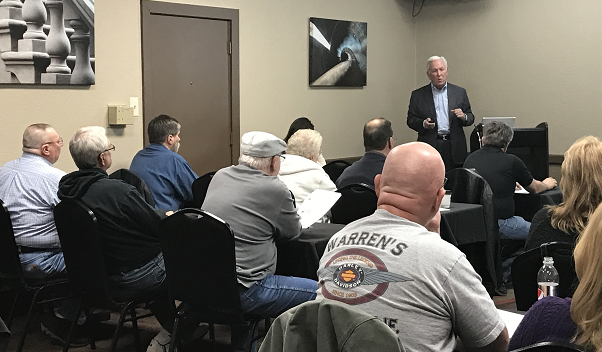 A few months ago I gave a free seminar as a public service to gun owners in Missouri. Many of you know I am not only a professional speaker I am also a trial; lawyer. Well, in some respects there is a lot of crossover there. The seminar was for people in the area, mostly gun owners, who wanted to know about the changes made by the legislature as it affected gun owners who wanted to carry concealed weapons. But there was more to it than that.

Missouri also has a new statute which is known as a “Stand Your Ground” rule. This is very dangerous. People really need to understand this law. Gun owners can get in a lot of trouble by not really knowing what it means.

There was a young reporter at my seminar. She was from the University of Missouri in Columbia, That is about 120 miles from where we met. I though about how dedicated a person has to be to drive 120 miles at night (and then back again) to cover a meeting of about 20 gun owners. But that is the nature of being in school and that is the nature of the journalism business.

The reporter said she was doing research on a project. We talked for a few minutes after the presentation. She was polite and professional. I thought then that she would be good at her job of reporting. I had no idea whether or not she was a good writer. She wanted to know about the attitudes of gun owners and what they could or could not do in certain situations.

Regular readers know that I am all about good storytelling. That is what a reporter has to do. They have to take a set of facts they observe and turn them into an interesting story. Well, the reporter, Cameron Evans got to do. It seems that not long before my seminar a young man in Columbia used his firearm to shoot at another man who he said was stealing his cell phone. Cameron worked that into a nice article and I thought I should share it with you. If for no reason other than to reward her for her hard work and dedication.