Who Will Seize My Guns? 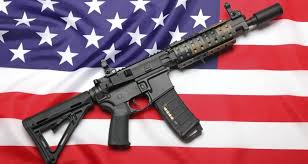 There are people who are all alarmed claiming that the government is going to take their guns. These people are miserably uninformed. Here is what is really going to happen.

We are all aware of the radical right-wing, white supremacist groups who are starting their own militias. Well, these are the people who are going to come for your weapons. Here is how it is going to happen. In fact the ground work is being laid for it as you read this.

Right now, somewhere in the western regions of this country there are communities forming comprised of these right-wing radicals. At some point they are going to reach the point where they are going to be able to take over, by legitimate political means, a small town or maybe even a county.

Before long they will start passing laws, or at least making rules, that violate the Constitution of the United States. It will probably start with some sort of racial discrimination. People of color will be deprived of certain rights or liberties.

Challenges will be made to these laws. Many of them will be held to be unconstitutional. But the ruling classes of these communities will refuse to conform to the rulings of the Courts. They will, in open defiance of United States law, declare themselves to be independent. They will declare that they are not subject to the laws or authority of the United States government.

In effect they will be acting just like ISIS did when they established what they called a “caliphate.” They will announce that they are no longer part of the United States.

Now we all know that just saying that doesn’t make it so.

The United States will respond by sending U.S. Marshalls and perhaps the FBI to try and establish order. But is will not come without bloodshed. This is where the guns start to be seized.

Living inside of this caliphate will be people who are not happy about it and who want to remain a part of the United States and subject to the laws and customs of the United States. Those people will be seen as a threat to the leadership of the caliphate. They will be given an ultimatum to either be with or against the rebels.

If they do not pledge their allegiance to the right-wing extremists they will be stripped of their weapons. You see the right wingers will not be constrained by the Constitution. They are not the Government of the United States.

If the people do pledge their allegiance to the right-wing extreme movement they will be forced to show their allegiance by actively joining one of the militia groups and fighting against the law enforcement officers sent by the United States government.

So do not be fooled by the right-wing, white supremacists who keep trying to scare you about the government taking your guns. It is not the government you need to be worried about. It is the radical right.